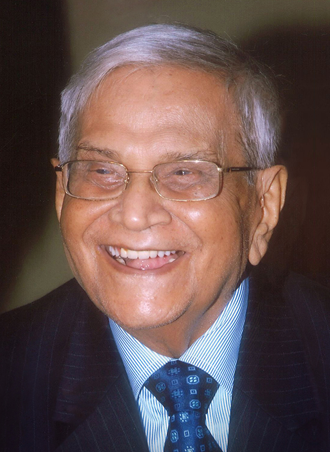 Our Chairman Emeritus, Mr.Samprada Singh’s life journey exudes courage, resolve, hard-work but most importantly, an undefeatable will to conquer fate. Mr. Singh was born in a middle-class family residing in Okri village of Jehanabad district of Bihar. His family’s major earning came from agriculture, which often were destroyed by the fury of nature. Although, Mr. Singh couldn’t fulfil his aspiration to become a doctor, Mr. Singh did become the first graduate of his village. He then forayed into agriculture and then started selling umbrellas. In the year 1953, Mr. Singh opened a medical store and just six years later, a pharmaceutical distribution company – Laxmi Pharma. Later, Mr. Singh started his own pharmaceutical distribution company, Magadh Pharma in Patna. After 16 years of distribution, Mr. Singh decided to enter pharmaceutical manufacturing with Aristo Labs in 1970. But, after a series of setback and failed partnerships, Mr. Singh took a decisive step, which definitively changed the Indian Pharmaceutical Market. The year was 1973 and the step was the establishment of Alkem Laboratories.

In a time, when Indian Pharmaceutical Market was dominated by International organizations, Mr. Singh’s bold step redefined the potential of the Indian pharmaceutical companies. Today, Alkem Laboratories develops, manufactures, and markets pharmaceutical formulations and nutraceuticals in India. The company has operations in Europe, Africa, the Asia Pacific, South America, the United States and India.

It was under Mr. Singh’s visionary leadership, Alkem became one of largest pharmaceutical company of India, and carved out a distinct place for itself in the global pantheon of pharmaceutical giants.

His success story fired the imagination of a generation of Indian entrepreneurs, business leaders and progressive companies. For many, he still remains an icon, a role model to be emulated. Mr. Singh may no longer be amongst us but his spirit lives on. His towering persona guides the actions over 14,500 Alkemites towards taking the organization to new heights. Just like Ramayana, ALKEM is also a story of two determined brothers, who stood by each other and chased their dreams with a fearless spirit. While Mr.Samprada Singh, our Emeritus Chairman, was redefining the potential of the Indian pharmaceutical industry, his younger brother Mr. Basudeo N. Singh stood strongly behind him, supporting his quest. Fondly, they are even being addressed as the RAM LAXMAN of Indian Pharma.

The foresighted elder brother always knew that young Basudeo is a prodigy who is meant to go beyond the tumble down walls of the Jehanabad district school of Bihar. Thus, as soon as Mr. Basudeo finished his graduation from Patna University and started off as a professor, he received a call from Mr.Samprada Singh to join the business. Mr. Basudeo’s diligence, endurance and novel approach proved to be very instrumental in developing a robust alliance with distributors. In spite of his higher academic degree and social status, he was humble enough to willingly deliver stocks at the stockists and distributors, during the initial years of the company.

Even after four decades, the story of ALKEM’s co-founder, Mr. Basudeo N. Singh is igniting aspirations of every team member at ALKEM. Under Mr. Basudeo’s visionary leadership, ALKEM has been creating ripples of success amidst Indian pharmaceutical industry. His sterling leadership qualities and ingenious work process earned him the opportunity to be the president of the Indian Drug Manufacturers’ Association from 2007 to 2009. Many awards and accolades won by him includes; ‘Business Leader of the Year 2014’ at the 7th Annual Pharmaceutical Leadership Summit and the Pharma Leaders Business Leadership Awards 2014. He was also the ‘EY Entrepreneur of the Year in Life Sciences’ in the year 2016. Recently, he received the title ‘Chief Mentor of the Year’ by the Indian Drug Manufacturers’ Association.

He is ALKEM’s own role model for his values like simple living, focused execution, foresighted planning and team building. With these values, imbibed in our heart, we go beyond being just a pharmaceutical company to an ethos called ALKEM.